The Benefits of Displaying Product or Group Differences Using Biplots

Biplots are among the most commonly used tools for describing and displaying differences of various products or group segments on multiple attributes or product features. Biplots are one of many types of “perceptual maps” which also includes discriminant analysis, multidimensional scaling, or plots of group means on principle components or factors. Biplots are more robust than these other techniques in that they can be used with many types of data, such as means, percentages, and frequency counts. Using a healthcare example, we’ll show how to use and interpret biplots in your research and why you should.

The biplot will be illustrated using data obtained by asking respondents how they rate six health plans on eight different attributes. The attributes comprise a checklist of features and respondents were asked to rate up to four health plans which they were most familiar with. Table One shows the percentage of respondents who agreed that they were satisfied with the brand or that the brand provided that service attribute.

A biplot of these data are shown in Figure One. In this plot, health plans are shown as points and attributes as vectors. We refer to this figure as a “biplot” because both products and attributes are shown on the same plot. Horizontal and vertical references axes have been drawn through origin (0,0). About 84% of the information about the brand differences is captured in this biplot, so it is an accurate representation of the data. 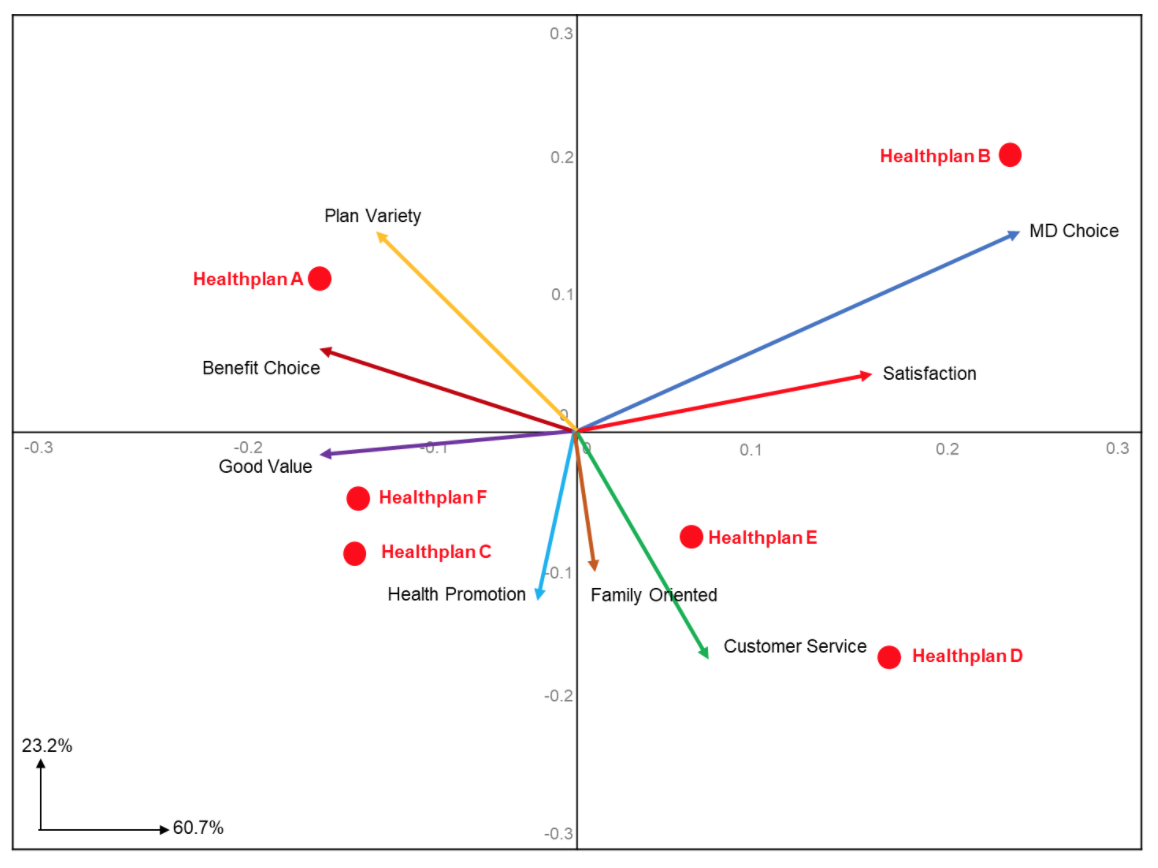 Each attribute vector has two important components: length and direction. The length of the attribute vector indicates the extent to which brands differ on that particular attribute. The attributes with the longest vectors indicate that the brands are most widely separated on this attribute.

In the example we can see that the attribute “MD Choice” is the best differentiator of the brands since it has the longest vector. Inversely, “Family Oriented” has the shortest vector. What this means is that consumers view “MD Choice” as a major differentiator between health plans, while being “Family Oriented” is the least important attribute in terms of discriminating among health plans.

The position of a brand point in the biplot is determined by the means of that group on the attributes. Therefore, distances between groups points on the plot reflect differences between group means:

In our example, Healthplan C and Healthplan F have similar means across all the attributes, hence they appear relatively close together. The remaining health plans are spread around on the biplot.

The direction of the attribute vectors in the two-dimensional space provides a basis for understanding the perceived differences among the brands. Generally, a brand scores higher means, compared to the other brands, on those attributes whose vectors appear in the same region of the biplot as the brand point. As we can see in Figure One, Healthplan A is perceived by consumers as having strong “Plan Variety” and “Benefit Choice.” Healthplan B is perceived as being strong in the area of “MD Choice” and overall “Satisfaction.”

We also plotted lines for Healthplan B onto “MD Choice” and “Satisfaction.” Here we see that Healthplan B maps higher on the “MD Choice” attribute vector. The same can be done for all the other health plans onto the remaining attributes to derive their strength. 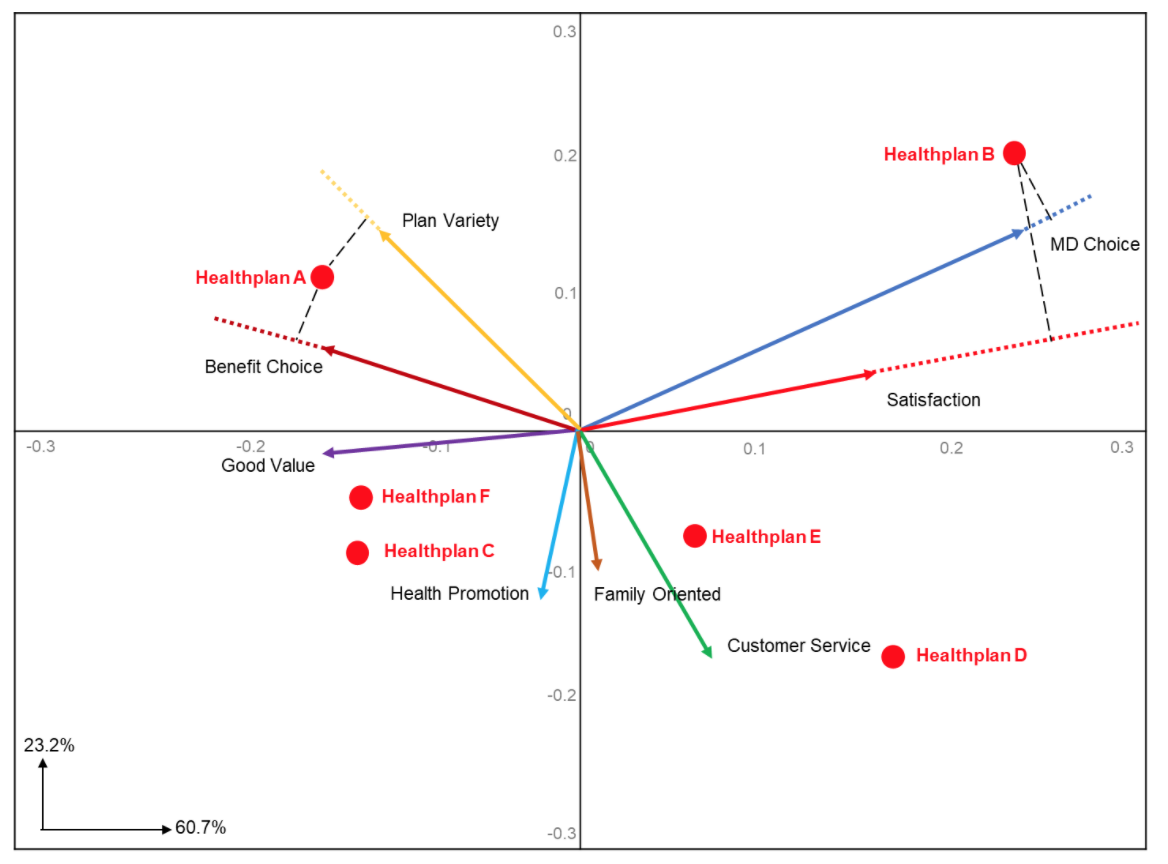 Biplots look similar to plots which derive from discriminant analysis. The visual similarity between biplots and discriminant maps arises because the objective of both techniques is the same: to describe group or brand differences on several attributes in a few dimensions.

The computations associated with both are also similar. The major differences between the two techniques are:

The choice between the two techniques depends on four factors:

If you have 25 or more brands and 45 or more attributes, then biplots offer a less expensive alternative. Discriminant analysis requires the collection of precise rating scales whereas biplots can be derived from a checklist of attributes (e.g., “yes” or “no” or “checked” or “not checked”).

Biplots Are Ideal When You Have Missing Data

Recapping the Benefits of Biplots

In conclusion, the biplot is the easiest way to organize and interpret a large amount of available data graphically to reveal:

Even with an incomplete set of data, like the example shown here, the biplot is an efficient way to present all the features of the data.

Let's Get To Work

Send us a message. Let's get started on building your research strategy.